You can purchase it even if you visit our company. 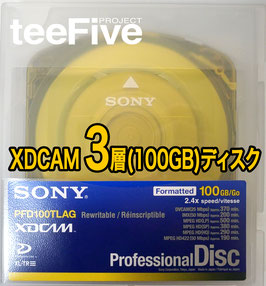 The Sony Triple-Layer Professional Disc Media is a pre-formatted, high-speed rewritable professional disc with up to 100GB of storage capacity. It provides quick random access making this disc a near-line storage or long-term archive solution. It can hold up to 370 minutes of SD recording (in DVCAM mode) at 25 Mb/s speed, and 190 minutes of HD recording (in MPEG mode) at 50 Mb/s speed.
Depending on the feature set of your recorder, this Professional Disc media can capture a wide range of video formats, including DVCAM, and MPEG IMX standard definition, as well as XDCAM HD and XDCAM MPEG HD422. When used with select decks, the entire disc capacity can be used for writing data files of any type. This gives the XDCAM disc format expanded flexibility beyond video content.

Note) The XDCAM shoulder camcorder can only be used for single-layer and double-layer discs! 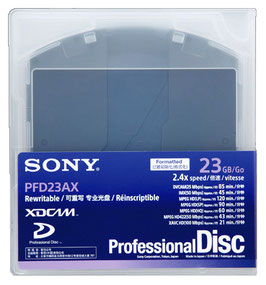 【即日納品可能・常時在庫有】
大至急必要な方は、お電話で！
（TEL: 03- 3229- 9009）
50枚以上の場合は、お安くなります。ご相談ください
ソニー放送業務用プロフェッショナルデスク23GB。（PFD23AX）MPEG-HD422, 50Mbpsで43分録画が可能。 ディスクは、フォーマット済みですので、カメラやデッキに入れて、フォーマットにかかる時間がなく、お使い頂けます！ ※XDCAMデスク（PFD23A）＝ケース幅が（PFD23AX）よりも5mmほど縮小。記録表などが1枚しか入れられないタイプです。記録表などをケースの中に多く入れたい方は、型番（PFD23AX）の本製品をお選びください。
With the ability to record up to 23GB of data on a single layer, the PFD23AX 23GB Single Layer Pre-Formatted Optical Disc for XDCAM from Sony can record up to 43 mins of video. In addition to expansive storage capabilities, this optical disc offers transfer rates of up to 72 Mbps on a single head unit and up to 144 Mbps on a dual head deck as well as random direct access. With an estimated shelf life of up to 50 years and the ability to withstand harsh environmental conditions the PFD23AX optical disc can go nearly anywhere you go.

【即日納品可能・常時在庫有】
大至急必要な方は、お電話で！
（TEL: 03- 3229- 9009）
※在庫が少なくなってきています（お電話で）
ソニー放送業務用プロフェッショナルデスク50GB。（PFD50DLAX）MPEG-HD422, 50Mbpsで95分録画が可能。 ディスクは、フォーマット済みですので、カメラやデッキに入れて、フォーマットにかかる時間がなく、お使い頂けます！
Sony PFD50DLAX Dual Layer 50GB Rewritable Optical Disc for XDCAM features 50GB Storage Capacity, 95 mins Recording Time.(at MPEG-HD422 L 50Mbps)
The pre-formatted, dual layer, 50GB Rewritable Optical Disc from Sony is capable of recording up to 185 minutes of standard definition content and 122 minutes of high definition content in MPEG mode at 18 Mbps. This optical disc is comprised of durable and re-usable media allowing it to be used under a variety of environmental conditions. Once the information is recorded, the estimated 50-year shelf life of this optical disc provides added peace of mind that the content will remain safe for a long time to come. 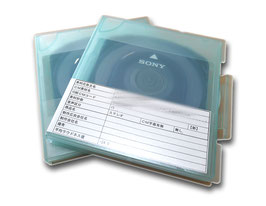 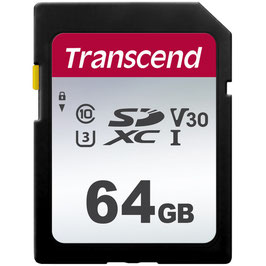 Designed for use in devices that support the UHS-I bus, such as digital cameras, DSLRs, camcorders, and more, the 64, 128GB 300S UHS-I SDXC Memory Card from Transcend can capture 4K, 3D, and Full HD video, plus raw and JPEG still images and photo bursts. It has a capacity of 64GB and features a speed class rating of V30, which guarantees minimum write speeds of 30 MB/s. If your device does not support the V30 standard, this card also supports the U3 standard, which likewise guarantees minimum write speeds of 30 MB/s. Read speeds are supported up to 90 MB/s and write speeds max out at 45 MB/s. A built-in write-protect switch helps to safeguard against the accidental erasure of card data.
While this card has been designed for cameras that are UHS-I / V30 / U3 compatible, it may be used in devices that do not support UHS-I / V30 / U3. However, bear in mind that this card will then default to your device's speed class and bus rating, such as UHS-I and U1, which supports minimum write speeds of 10 MB/s, or Class 10, which also supports minimum write speeds of 10 MB/s.
As with most Transcend cards, this memory card is shockproof, X-ray proof, and waterproof, while also being able to withstand static, plus temperatures from -13 to 185°F, allowing you to take this card with you into extreme environments, such as snow and deserts. Should the card's data become compromised, you also benefit from Transcend's free RecoveRx software for to help recover deleted content, including photos, documents, music, and videos.
Built for Extremes
To deliver improved performance and stability, Transcend's SD memory cards are tested to withstand extreme conditions.
Waterproof
Meets JIS IPX7 standards that can withstand immersion in 3.3' of water for up to 30 minutes.
Temperature Proof
Can operate in extreme temperatures ranging from -13 to 185°F.
Static Proof
Meets EMC IEC61000-4-2 standards and withstand static electricity.
X-Ray Proof
Meet the ISO7816-1 standard to resist airport X-rays.
Shock Proof
Provides resistance against shock, vibrations, bending, and twisting.
RecoveRx Software

Upgrade the storage and performance of your mobile device using the 32GB 300S UHS-I microSDHC Memory Card from Transcend. Designed to retrieve small pieces of data from random locations and improving app launch times, the 300S has a capacity of 32GB, supports the UHS-I bus, and features a speed class rating of U1 / Class 10, which guarantees minimum write speeds of 10 MB/s. Read speeds are supported up to 95 MB/s and write speeds max out at 45 MB/s, also making this card suitable for Full HD video, plus raw and JPEG still photos and bursts.
As with most Transcend cards, this memory card is shockproof, X-ray proof, and waterproof, while also being able to withstand static, plus temperatures from -13 to 185°F, allowing you to take this card with you into extreme environments. Should the card's data become compromised, you also benefit from Transcend's free RecoveRx software for to help recover deleted content, including photos, documents, music, and videos. So that this card may be used in SD-compatible devices, a microSD to SD adapter is included. 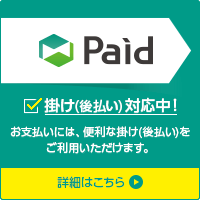